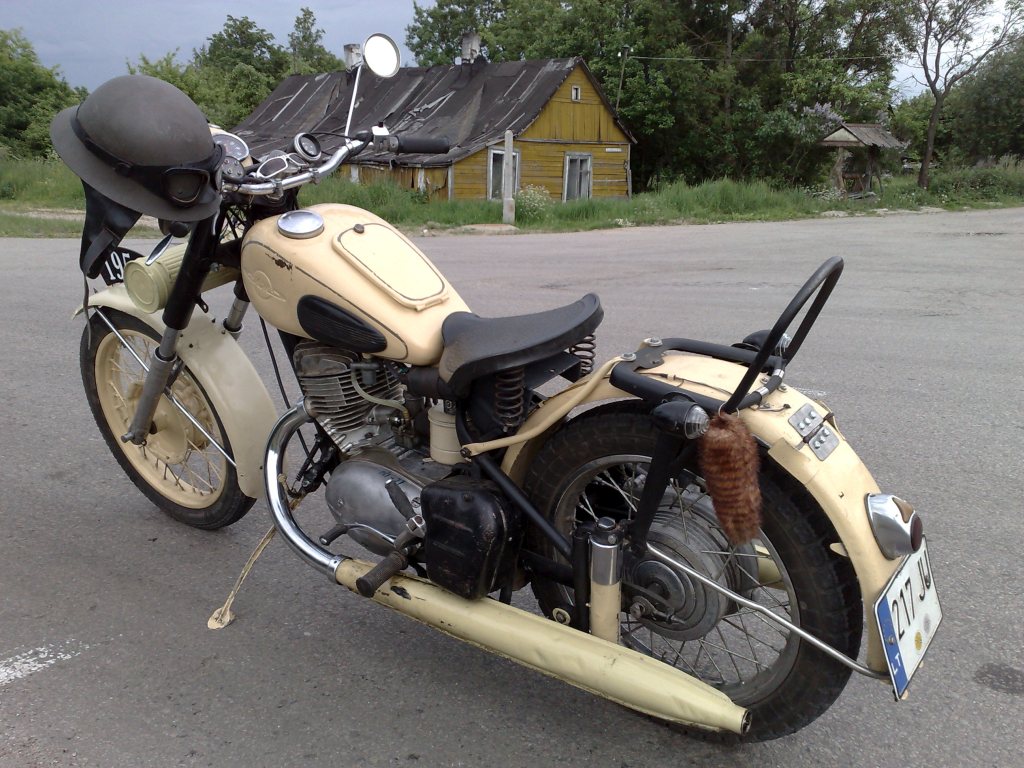 Another project I did back in 2008 was one of my top 5 favorite projects till this day. I have a thing for Russian IZH (ИЖ) motorcycles since I was kid, even thought they are heavy, under-powered and usually comes with lots of issues. So I’ve been collecting various rare, new or very good condition parts of the older models for several years and one day I realised I have enough goodies to build something interesting. At the time I was riding original Izh 56 bike, plus another similar field bike in countryside so I decided to use some creativity and build somewhat bikerish-old school looking vehicle with the purpose of attending to Lithuanian bike meets and shows. Also, it was a good practical and theoretical mechanical engineering exercise along my engineering studies.

The initial project overview was:

Everything else was adapted along with the project.

So I dig out Izh 49 already chopped (sadly) frame, got rid off some additional brackets, mounts and made a first mockup just to give a heads up on overall looks and some required design changes while keeping old school look. A notice to clean restoration lovers : this project was all about the reliability and daily use. So there will be some weird technical practises that came from thoughts about the universe and enlightenment while consuming a lot of beer. Sorry for a bad quality pictures, they were taken with oily hands and a potato camera.

The first challenge was to fit a wider Izh 56 rear wheel with the enclosed sprocket and brakes system into the original swing arm. That required some heat and brutal bending skills, some welding and here we go, rear setup found its place.

The old frame got really nice shape, despite the rear shock system that never works. There was a few days of boring parts cleaning and preparation for a lick of paint. In the middle of the jobs I got an idea to preserve the 50 year of damages and rust scars on mudguards and fuel tank. Also realised, that lurking in a cold garage with massive bench wire-brush-grinder-thing and cleaning parts (wearing invisible safety glasses of course) is so tedious. Next day went to local factory that manufactures various industrial machinery, walked into the reception and asked about the posibility to sandblast few parts. Lady got in touch with the production manager, and he, after short chat, gave a cheap quote for the works. Same day afternoon with a creepy and happy smile I rolled out with freshly cleaned parts. Also, since that day I had a place to sandblast any parts for future projects.

No filler were used on parts whatsoever for two good reasons. As mentioned above, loved the rusty-holed look and also I don’t see the point of having perfect paint job and then stressing out about a small scratch on the paintwork. Some people might say that is unprofessional and lazy. Well, maybe it is, but I had quite a few positive comments at the shows so I am happy. My bro is a panel beater, so I used to spend many hours at the workshop where he works and of course, use the opportunity to get some jobs done. Found unusual color too.

Some more works on installing original throttle system on a wider handlebars and minor exhaust repairs. At this point I had to weld holes, otherwise it would get messy during the rides.

Here is the engine. I found Izh 56 block with the bottom end already fully rebuild by the previous owner, who was a machinist at the manufacturing factory. Despite that, I wasn’t sure how well its been done and also wanted to do some simple mods and eliminate those 50s-60s factory build inaccuracies and get more efficient engine. This is were the times when we started to experiment with various engine modifications, better assembly, parts manufacturing precision and tolerances. Down below there’s a different eras (late 50s, 60s and 70s)  Izh engines and parts. Majority of them are interchangeable or can be fitted with minor machining. So the idea was to look at the engines specifications and pick up the parts to suit my needs. I wanted to have an oldest engine running on 95 petrol (not 66 or 72) and have same or abit more power than the latest generation motor, also, way more reliability on the road.

After few months of hunting the right parts, various small machining jobs and with a help and tips from a person who is specialises in those type of engines it was rebuilt and ready to go. Double row bearings, polished crankshaft, ported and matched transfer ports, fixed bore and crank bearings housing geometry, ported cylinder and some other stuff were done along the lines too. One more thing I wanted to do is to convert old 6V (45W) electrical system into more reliable 12V (100W) and be not afraid to “run out of electricity” when you turn lights, indicators and brakes on at the same time. It was concoction of latest gen alternator and a VW Golf Mk2 ignition parts. 4th gear ratio was changed too to get more cruising speed. I remember I used all the best parts I was stashing up for a few years in this project. Unfortunately, I could not save original cylinder due its bad condition, but I had brand new Izh Planeta 3 top end assembly still preserved in oil since it left the factory and it was a no brainer what to do next.

Some changed specs of the original engine and the old-new-tweaked one.

Few other goodies were prepared for a chrome plating. Aluminum parts polished as good as I could possibly could at the time. I think that was the most expensive job in this project and even after many years it still holds the title of Arvy’s most chromed project of all time. The speedometer was taken from the Panonia motorcycle just because it works backwards and it just simply different.

Once all those fiddly job were finished, the final assembly went quick. People who do similar projects will know that it is the most satisfying and the quickest part of the project bike. Then it slows down again for final adjustments and tune up.

For wiring I used some old school plugs. It supposed to give some vintage look but at the end turn up more messy than expected. And this was the brain box with all necessary regulators and rectifiers for the ignition and led’s.

Few days or so later the bike was finished. With that engine, more precise and reliable ignition and carburetor you could kickstart from the first try everytime. And the idling can be setup to 60rpms. Literally stroke per second (maybe even slower). Looking at the pictures now, I can see so many unfinished or totally non matching parts around but it was a good practice and design exercise. A honest advice: don’t put any spike looking fasteners nowhere near to the motorcycle. They do hurt!

I did enjoyed driving it on the Lithuanian roads, however for not that long. I believe moving to UK circumstances made me to sell it at some point.

A short video of the progress. One of the first bike starts and adjustments: