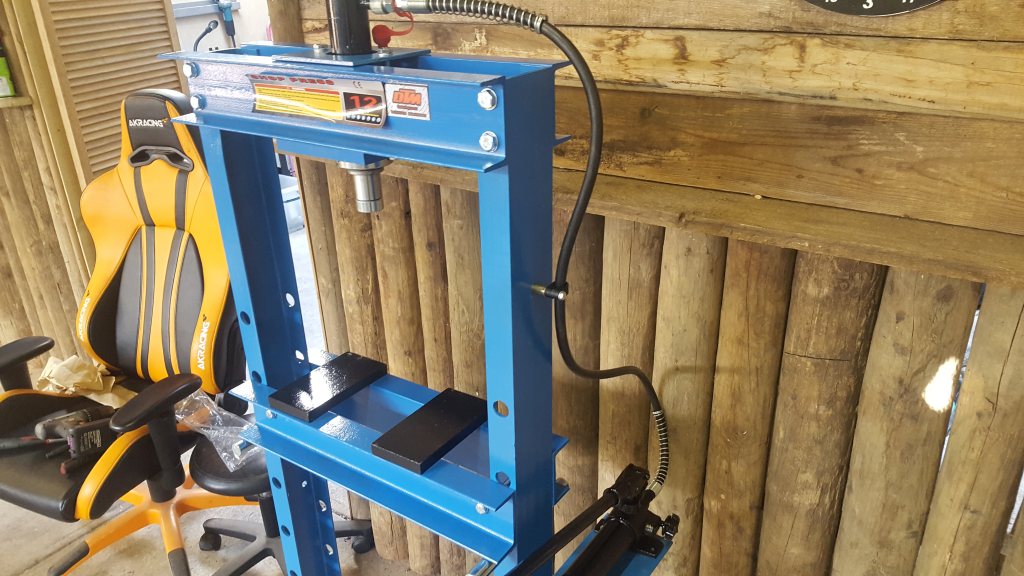 A new toy arrived today. Wasn’t really looking to get a hydraulic press anytime soon but it I needed to press some worn out wishbone bushes out of my partners just bought project car.  Looking at the Audi parts availability and prices in Australia we decided that it will work slightly cheaper to get a press, upgraded bushes and do the job ourselves. Plus a handy equipment for the future.

I was always a fan of the presses with the separate hydraulic ram, not the bottle jack. Not only more versatile and could be used with other hydraulic equipment as it got standard easy connect fitting but also looks more professional. Bottle jack press is something I would build myself if had some steel beams and patience.

So went looking for one on machinery shops, local ads and facebook marketplace. Eventually found it on Ebay priced $295 AUD and was being sold by a local aussie company. The set of control arms for Audi S3 with better bushes cost $300 USD and probably plus customs charges. So my budget was $250-$300 AUD and that’s the price gap for 12 tonne press. Went to the company and picked one up. The seller pulled out wooden crate from an old van that been lurking outside the shop for years (probably temporary storage for reservations) and gave me an invoice with $235 AUD. It confused me for a minute but I thought I just misread the price on Ebay because had multiple different ads opened at the time. Just later on I found out that had a nice discount without even asking!

Quick puzzle for the Saturday morning. Using disassemble drawing I have to assemble the press. Personally I would give disassemble drawing if selling fully assembled goods and only if the end result have to be separate parts, but it just might illogical logic.

Even though the parts were well packed but have a dent on one beam, no paint scratches so I assume it was there before it was painted at manufacturers place. Same with the left sharp edges from cutting material. Probably quality control is an optional thing.

Whole assembly process took more than an hour. It sounds abit excessive but extra hand would have been helpful while holding few steel beams together with one hand and trying to put bolt and then nut on it with another while balancing whole assembly mid-air. Also used nyloc nuts instead of provided spring washers and classic nuts and some extra washers that were missing.

It’s good to know that it was CE certified, even though I thought it was built in Aussie. However, the sticker gives some confidence that it was actually built in Europe and shipped over here and it struggled to withstand Australian temperatures. I couldn’t resist to do a small modification and attach a clamp for the hose. Looks tidier and not in the way.

And here we go. 12 tonne shop press is ready! Well nearly, no hydraulic oil was included so will be used another day.