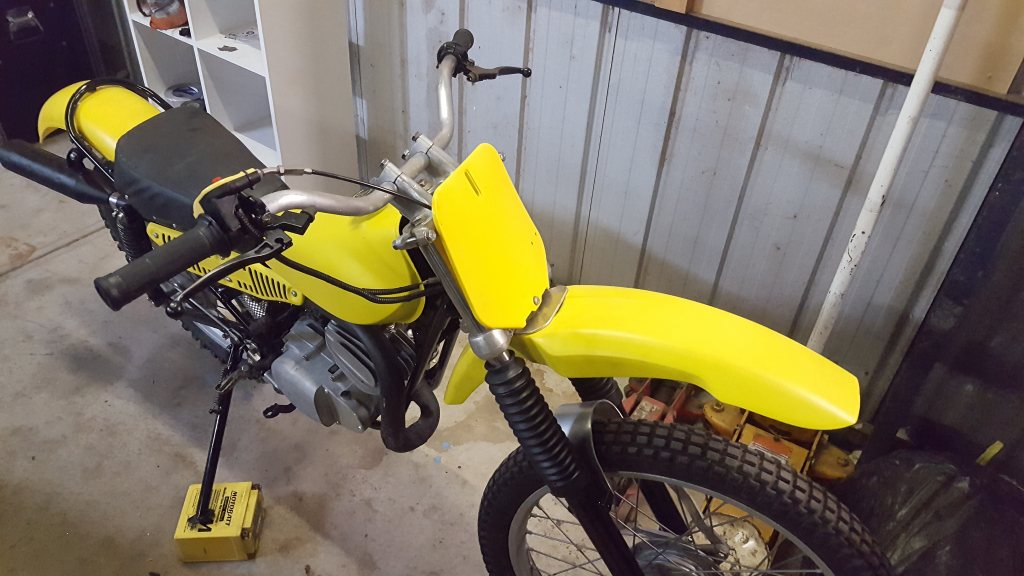 Finally the most interesting part. After months of cleaning, repairing and hunting for parts, material and tools I can eventually enjoy the essence of project build. Majority of the parts are there and ready to go on the frame. I know that there are missing and non original bits around but, as I mentioned before, it’s my first bike in Australia, being done under a tight budget and generally keeps me happy. So parts got eventually spray painted. Sadly the quality is not the best, and yellow parts are not all perfectly covered. However it is a field bike, so it will get covered in scratches very soon. The front forks were ready weeks ago. Unfortunately I couldn’t find original dust seal caps so slid those oversized condoms as a temporary measure. Now I am questioning myself why I did that to be honest. So new ball bearings, lots of grease, and a missing main top bolt. While going through the drawers I accidentally tried to screw a spark plug from a Holden Commodore and it fit perfectly. So during the lunch next day I started to cut and grind and weld a custom bolt. My work colleague saw my efforts and brought an original nut the following day. Just by accident he had laying it around in the shed!

Swing arm was equipped with new freshly machined PTFE inserts and stopped from being loose like prick in a bucket.Wheels and footpegs were ready and been attached within seconds. Found out that one eccentrical type of chain tensioner/adjuster is from the different bike but does the job. At the front the axle C shaped clamp was missing since the day I bought the bike. I tried to find a similar part on a sale or alternative to make it fit but had no luck. And yes, none of the handlebars clamps were suitable. That little thing slowed down all the assembly fun to the point where I nearly lost my patience and went to make my own one.

Found a block of aluminium that was already nearly perfect size. First, drilled holes for the studs and then spend some time on a band saw reshaping whole thing to something that looks like a clamp. After lots of filing and grinding I got a wonky looking clamp that fitted perfectly.

Brake pedal was badly worn out. Had to chop off original worn part, turn it down on lathes and reweld back onto the original lever. Then redrilled hole in the frame and machined PTFE insert to suit in between. It was tight fit but with the help of G-Clamp pedal was pressed in and not coming out anytime soon.

All running gear found it’s place. I’m really glad I managed to find original air filter box and the hose back in the UK. Carburetor was cleaned out and autolube feed nipple blanked off. Rear shocks are temporary. Still awaiting for a replacement from China. Side stand came from Atomix motocross bike and it fitted without any modifications. However, bike rests on a steep angle but still it’s good to have it. Once I got the engine and all pegs and brakes in, I noticed, that we have a small issue. It appears that the kickstarter is from a different bike and fouls on the foot rest when you try to crank the engine. So another job on to do list is to hunt another one or will have to do some cutting and welding again.

I did some more fiddling on a Yamaha just before moved houses. The kickstarter was cut into pieces and tried to replicate to original shape. However, the swivelibly bit is completely different and after few cutting and weld tacking attempts I just had to make it fit. Tried to get much throw as possible and it did worked out pretty well. Only concerning bit is that kickstarter is now resting on the block on a slight tension. Will have to readjust once I get bike running and will know how much throw is enough to comfortably start the bike. Also made a plate to cover the engine case where ex autolube pump was mounted. Another missing original part.

Rear aftermarket mudguard found its place using original mounting holes and extra bracket to make it less flimsy. Sadly the seat cover had some wrinkles, original material lost all its elasticity after so many years and didn’t want to play the ball.

Looking at the original Yamaha TY175 pictures I found out, that exhaust/muffler part I got from the UK is sadly not original. However apart from the exhaust tip shape and the mounting lug it looks very close to original. Also, the joining part was missing and had to make something up. Once again went material scavenging and found a perfect pipe from Duramax 6.6 engine oil pick up line. It actually was the right size and snuggly fitted on the muffler. Had to make some bends and a small cut-out to have more clearance for the tyre (in case of bottoming out) and for the rear shock absorber. Rewelded muffler lug and bolted on the rubber mount.

Just before the big move, I had an access to a TIG welder and this was my first attempt to weld aluminium.  This shoe looking bracket is my creative contraption to mount a front mudguard.

This is current bike state: Have some shopping to do and find last parts such as longer levers, front brakes cable, fuel tap, rear shocks, chain tensioner, fuel cap and then try to start it up.

One Reply to “Yamaha TY 175b Assembly UPDATE”