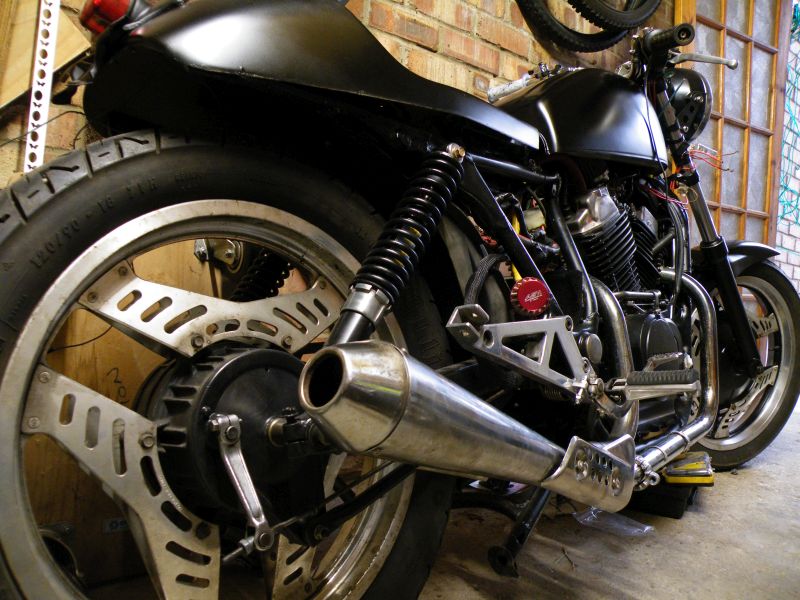 After bike stripdown, clean up, check up and compiled long “To Do” list lets try to bring it back to life. Started to modify that Caffe-inated seat base to fit on. Was bit difficult to do a quality job as I didn’t have own car to run around, source materials and parts so all I did was scavenging random bits, pipes, brackets at the back of the workshop. There wasn’t alot of pretty and fitting parts around so had to be inventive. Seat frame was magically welded on using small oxy torch, as MIG welder spazzed out and was out of order for few weeks and I didn’t have that much patience to wait. Front end was rebuilt using non original bike parts that I collected at one of the biggest salvage/scrap yard near Cardiff. They had tons of police impounded and damaged bikes lying around. Headlight, handlebars and everything else on them were scrambled from there. Can clearly see that parts just doesn’t match (like the speedometer and handlebars clamps). The top of the frame had to be modified to fit new Honda fuel tank. Therefore, original undertank air box had to be scrapped.

Removable seat base was made from an old Car Service advertising sign. Aluminium – plastic sandwiched material was so easy to work with. I scrapped rusty and heavy original exhaust pipe. Seen that some racers have so-called megaphone type exhaust and they were twice as smaller. With the idea of finding one later prepared Y exhaust headers joiner to go on. Luckily, the pipe bends from some small car exhaust fitted perfectly.

Got lost in wiring loom. Originally, bike had various “failed brake and light bulbs warning” and hazard lights, fuel and temperature dash gauges and more unnecessary wiring. With the idea of having simple racer, had to dissect the loom and remove them unwanted circuits. That took some time tracing wires, figuring out what does what.

Then followed some light engine works. Mainly taking parts around it, cleaning, painting, refurbishing and putting back together. Flushed cooling system and cleaned all the pipes.  Things like new gaskets, thermostat, temp sensors. As per usual, managed to snap exhaust bolt so was a lot of Russian swearing. Did few Ebay purchases like red throttle cables, breather pipes, air filters, grommets, rubbers and other perishables. Didn’t get deep into engine hoping it is not in bad condition, as compression in both cylinders was very similar. However, had some works to do with them carburettors. The intake rubbers were too far gone and one of them was internally half corroded. Luckily there were few bike wreckers in UK who and found a good set from a newer model. The only difference I found was two heat sensors installed on the bottom cowls (for a cold start?) and different jets. Gave a dodgy quality lick of paint and, without dropping engine again, installed into a frame. Some more extra brackets were welded to hold new fuel tank. Two air filters had to be slightly barbarically reshaped to fit under tank.

Very first start after all them years. At the end of the video you can clearly hear my co-workers dissatisfaction for making burbling noise during the lunch. Must say, didn’t expected it would run well with those carburettors.

At this stage I had a major change in a life and work. Got a better job, had to move across the country and start a new life chapter. Been few quiet months and bike was left in a garage untouched with rest of the parts in various bags. New job was more rewarding and now I could afford doing better quality work. Grabbed seat first as a project kick up back on the track. First attempt to upholster seat at home was appalling. Struggled to get leather sticking and holding nicely around the bendy part. Also, to make it removable, used same method as majority of car door trims are held. Local questionable back street panel repairs garage gave a fresh coat of black paint.

At my new job I was dealing with with some Hi-End offshore rigs equipment and had boxes and buckets of marine – aerospace grade stainless steel bolts and nuts that were disposed after equipment repairs. And they fitted perfectly on my engine cases and around the whole bike. Discovered Moto Jumbles around the area and scored that pre-planned megaphone exhaust with a bracket to cover the joint part. And now bike finally started looking like some promising project.

Found a small company that specialises in bike seats. Was asked to send the base and the foam, choose what I want to do and the colour and then wait patiently. 3 weeks later received seat with a leather properly attached. Cost just over 60£. In the mean time added red stripes on a bike and cleaned up the garage.

.And here we are, at that time my VT Cafe Racer project seemed nearly at the finish. Bike is running, but not tested well on the roads still. Was awaiting to get my European Driving License changed into UK one. Also, new people coming into a life also stopped from getting it out on the streets properly. There was last thing I was trying to vaguely sort out – side covers. I think that was the main excuse of dragging all this project at the time.

So it was just few short run arounds the busy block, trying not to annoy locals too much, as bike didn’t had insurance and MOT. However, things will drastically change in the last chapter!