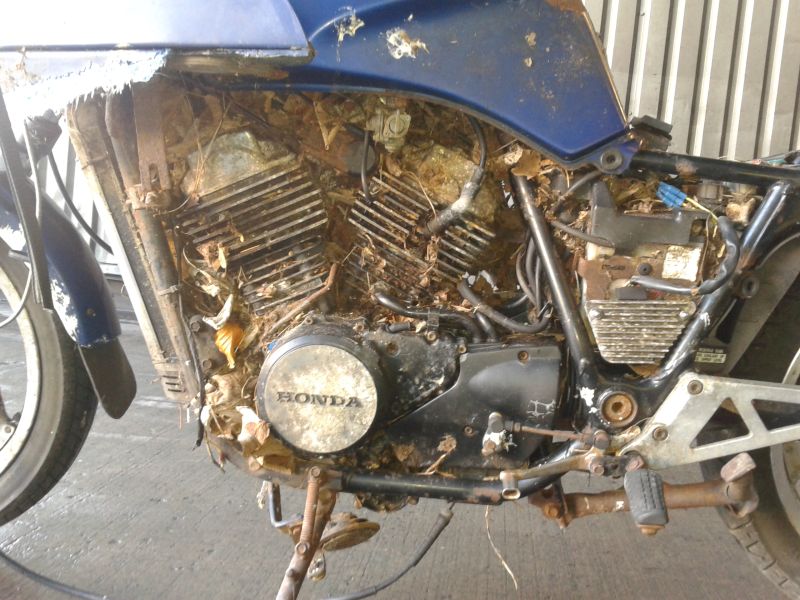 This is my long lasting project that kept me sane during the years I lived in UK. I bought it when I was still fresh in a workforce there and was a mechanic boy in Cardiff, doing shitty job for a minimum wage. Or maybe even below that. Definitely not the best memories from those times regarding jobs, long public transport travels to and from it, very small friends circle and the household situation. Later on I moved several times across the country and Honda travelled with me to those new homes. Better jobs, new connections and access to various machinery/equipment led to better build quality. In this chapter I show how everything started.

I bought this ‘beauty’ in 2012 on Ebay for £120 as complete pile of crap. Today I don’t know why I wanted it, as looking at the pictures all you want is just to cry seeing the condition. Back in 2012 I think I wanted to start fiddling on bikes, was working in a car service and had some space there. Plus cheap Ebay project bikes were on a fashion. I thought I will take a risk bringing back to life and converting into something nice. Remember the 60£ bid was sitting for days from one bidder and I was eyeing auction daily. Only last day I decided to put up to 150£ for it and hope the best. So I won and shortly after I was travelling 60 miles away to pick it up.

It was late afternoon and when I arrived to the seller we quickly loaded bike into a caddy and I was on my way back home. I didn’t realised how bad the condition was till the next day. The bike has been left rotting under the trees for years at the back of rented property. None of the recent tenants and landlord had no idea that it existed there. It didn’t had any documents or keys, even the identification plate was half corroded. Luckily it came with the old number plate and with my boss help who was in buying and selling cars and owning an accredited service managed to legally register on my name.

The stripdown and inspection. This was my first Jap bike project so I was exited and scared at the same time. All my teenhood was spend on Russian bikes that are very simple and this one had more stuff bolted on than just a carburettor, air filter and 4 wires. The more parts i was removing the scarier it got. Told myself several times that it will be impossible to resurrect it with minimum funds.

While taking bike apart I learned that those models had driveshafts (my favourite), some weird bolted together rims and unseen enclosed front disc brakes. My first watercooled bike too! So much new excitement and so much anxiety. Thermostat housing was full of cheese and only a carcass of thermostat itself was found inside. Hard to believe that rest of it disintegrated in time or maybe previous owner did some dodgy modifications. At this point I started worry about the engine thinking it will be seized, full of cheese and rust too.

Then was a highlight of a whole bike disassembly adventure. After I steam cleaned engine I managed to drop it from a stand straight on one rocker cover and cracked it. That clumsy surprise was followed by a tirade of English, Russian, bit of Polish and Lithuanian swear words. On the bright side I could now easier to take covers off and have a look at the engine, hoping it’s not a pile of rust. Took a long automotive crowbar and cranked it at the output shaft knuckle joint. Engine turned over easily, no suspicious residue, water or germs found in oil and dissected oil filter either. In a following week found another rocker cover on Ebay and the cheapest option was to buy and ship it from… Canada. My boss at the time seeing me fiddling with a bike parts after work all around the workshop let me to settle down in a corner surrounded by car engines.

Fascinating design of front brakes made a challenge in trying to source wearable parts for them. It was the first assembly I started to tackle on. It was more like cleaning all out, and rebuilding with current parts or trying to spend less as possible. The caliper was in not the best state either, but not being able to find a replacement I went the cheap dodgy path of just rebuilding it and hope the best. Next piece was radiator with fan, Did very similar job to brakes, checked it for any leaks or corrosion, fan operation, cleaned everything and rebuilt it. Picked up those jobs first that I could sneakily take part by part and fiddle with them as day went.

I was cleaning, refurbishing small parts during the weekdays and plotting, researching and looking for suitable parts on weekends. Corrosion left big marks on original aluminium rocker covers. Kinda liked that look, sadly new cover was in a good condition and looked too good. On Ebay auctions I found a cafe racer style seat base that was made for BMW K100 and a fuel tank from another unfinished Honda project. Visited local wreckers yard and found more goodies like pegs, aftermarket headlamp with holders, handlebars, levers from impounded bikes that could not be sold as a whole.

In next chapter somehow make them aftermarket parts to fit and get the bike running!