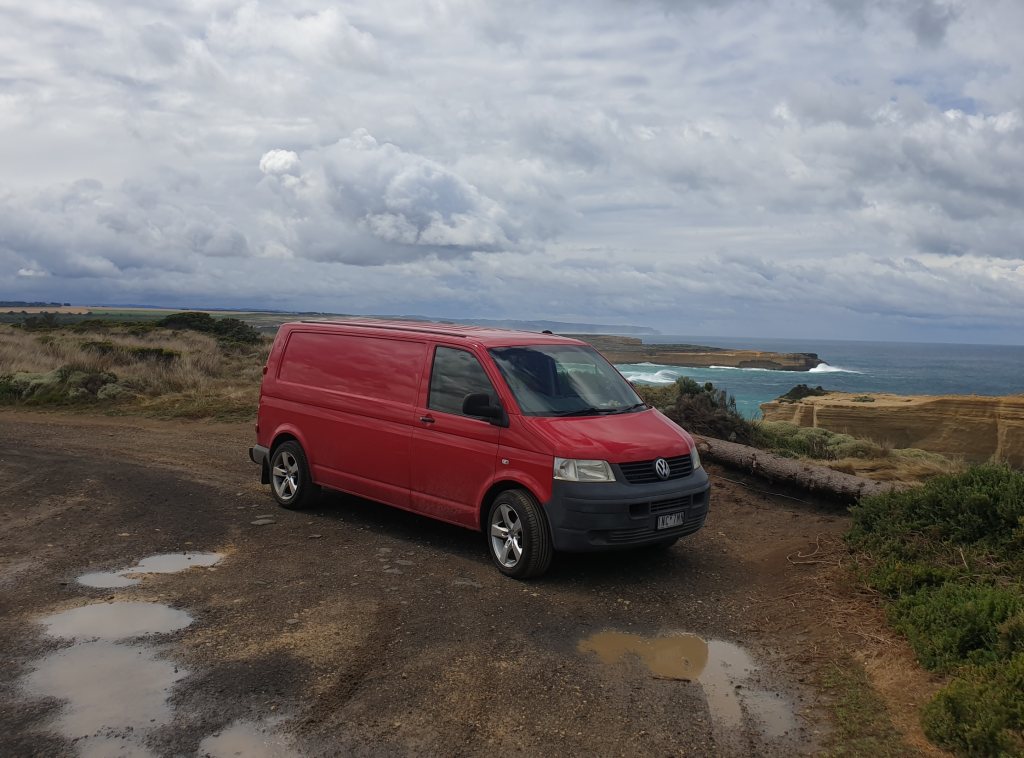 Not so long ago a new family member appeared on my doorstep. It was an unexpected purchase but when I found local ad advertising my favourite van with the right engine and manual gearbox for the half of the market price I just could not resist. And here we go – Transporter T5 2009, 174 hp (128kw), BPC series turbo diesel motor. At the top of the power range in its class and its… RED! The person who sold it had no interest in vehicles and saw it as a simple tradesman van and nothing else. However, its not very simple to find one with 174 hp power plant under the bonnet. From first glance it had some small issues all around as per usual. It was used as a business vehicle by previous owners so sadly have quite a few paint scruffs and small dents all around, plus interior is also seen better days.

First thing first had to sort oil leak from Tandem pump. One of more common failures on those engines, just a special steel gasket needs changing. However, those are more expensive over here than in Europe. Previous garages tried to bodge it up with silicone but clearly didn’t work. So, I skyped to my mate back in Lithuania and two weeks later I received a whole repair kit with all the seals, o-rings and gaskets for the fraction of local price. Also a very nice and welcoming letter!

Then, as per my usual interest, started doing more maintenance on engine components and maybe got carried away. Checked turbo condition, alternator and AC rubbers, cleaned throttle body and intake manifold. Had so much carbon built up in them and to reach all areas inside the manifold wasn’t very easy. Made a bendy swibbly long wire brush thing and patiently worked it out. Found out that I have some sort of oil level sensor in the sump that is not plugged in (maybe even never was) and its not throwing any errors on diagnostics. After some digging and questioning around I was told that VW manufacturer used to make engines with all the options, threw them into vans and simply left some sensors unplugged if the certain vehicle came without those accessories. If I had a Multivan or Highline probably that sensor would be programmed into ECU and show on a dash if oil gets low.

As planned, I had a few months to play with the van till I could put it back on the road. So I couldn’t resist doing some mods and other refreshing works to it as it’s just my nature. Started pulling interior out with so many plans in minds, but just only a few were actually implemented. Previous tradies did left a mess inside, so first step was to give a throughout clean. Even bathed all plastic panels and gave a good wash to the whole interior.

Sides and a roof been soundproofed. Had a bad memories from having T3 van back in University days and that unbearable noise at the back when driving during the rain or on gravel roads. The frown and suffering face of my mate sitting there, holding old rusty motorbike that we picked up somewhere in countryside was priceless and it stuck in my head forever. Ideally wanted to soundproof top side parts too, but left it for now as it is. Had plans to cut a windows but wasn’t 100% sure yet. While having all panels off, quickly run some cables and put some hidden switches for future accessories such as dash cam, GPS tracker and whatever else will be installed in the future.

Fixed smashed side panels in a very Eastern European way (it works!). Ended up cheaper than trying to find another decent panel set or trying to make new ones. Also, having carpeted panels does give more cosy feel when going camping, road trips or just chilling at the back for any unknown reason. Staple-stitched broken panels, added extra fibreglass layers from insides and glued on some hard wearing carpet. To make it partially nice,  out of I had to carefully remove carped base layer, fold and glue carped edges inside. Was very time consuming and finger slashing job. It did work at the end and I’m still happy. About 7 out of 10 on a score scale. I used very special black push-in plugs to hold the panels back on the body. They came from a new HINO trucks chasis I used to work on a while ago. They fitted perfectly and easier to work with them, instead of original plastic screw type plugs. One truck had 6 of those on their drivetrain and I needed around 100 for all interior. So was a long time spent of collecting them.

Next was speaker upgrades. I was a fan of a Hertz speakers as they are pretty reputable in a crystal clear sound and quality. Plus love that enclosed rubbery orange magnet! Original front speakers, as per usual German cars design, have to be unusual shape. I ordered one size bigger woofers and needed to source new spacers. It wouldn’t be a problem living in Europe, as ebay is full of them. However, none were found in Australia. Buying and posting them over here seemed not really worth it. Decided to dissect original speakers and use them as a base. I cut a wooden rings to approximately match the new size, that by accident fitted perfectly on my grinding wheel, and and sanded them to required size in a very sketchy way. Some epoxy, extra screws to make sure its been hold properly and we have a suitable spacers.

Doors got some soundproofing too. Would be a sin to leave them bare after all back works. Ripped the dash into pieces to run all the cables to the Amp, back speakers and other accessories under the passenger seat. All wiring was neatly done and incorporated into original wiring loom. Took days to make it right. Found matching Amp for speakers as well that snugly fit under drivers seat.

One of most exiting changes where the front seats. I absolutely hated that grey, industrial, dull and worn seat material since the first drive. Seat covers that originally came with a van also were too molested to happily keep them. After seeing decent seat cover prices I decided to do something better than that. First try was to find a nicer looking seats, possibly from a newer model. However, all I could find was the same (or very similar) color and pattern seats, just different type of arrangement, eg. two turnable front seats from Multivans. Did online research on local seat re-upholsterers but that was insanely expensive. Found a few aftermarket manufacturers who sell DIY seats kits, but from the pictures they didn’t look very snuggly fitted and had wrinkles all around. Just before loosing hope to find something useful I came across a company who does a high quality upholstering (Lagriva.lt) back in my native country. It was around November and I had holidays booked to fly back to hometown for Christmas. Then a penny dropped and I realised that I can simply take old seat covers off myself, bring them over there and get new ones made to match before returning back to Australia.

My holiday luggage space was 80% taken by car seat covers, so family didn’t get many presents from down under. The upholstering company I visited were pleasantly surprised that someone from other side of a globe made such an effort. Did really good and a high quality job. Passengers seat was pretty easy to put it back together. Drivers one took some careful and inventive stretching. All seats took a few hours and a 6 pack of beers to finish. I think I found a new pleasurable job to do in car tinkering. Its time consuming work but makes me happy seeing out-turn.

Here we are, colour matched and back in place. Definitely gives more soul and character. At the same time got handbrake handle and a shifter gaitor matched to the seats too. Really happy with the results and it didn’t cost that that much in total. Well it still was above 1000 Aud, but local prices were double that!

At one stage was dedicated to install this new T5 or T6 multimedia unit but faced lot of unexpected challenges. It appears that my double DIN slot can’t take original newer VW unit. Even if it could after a slight modifications the heater controls are in the way. After some digging I went for a plan B – replacing whole front panel middle section from a T5.1. The plastic frame size, mounting points were the same and would have fitted perfectly. Plus it is a nicer shape with more stylish switches and vents. Double DIN slot positioned slightly higher and radio would have fitted perfectly. However, one little issue was, that majority T5.1 vans were equipped with climate control, not manual twisty switches as my van do.

Heater panel easy to swap, but finding newer front panel cover that matches manual controls is a problem over here in Australia. I dug out several pictures with the right cover but all of them were in Europe, and the ones that were on sale cost over 100£. All in all decided to scrap that idea and in the future get an aftermarket Android double din multimedia system with way more features. To flush that frustration and sorrow of not having my snazzy radio I brought home some more car goodies. Sunvisors with mirrors from Multivan as Transporters don’t have them, transplanted Highline steps grates and lights onto my black plastics and made missing mounting hooks for the back.

Finally got it majority repairs/mods done (for now) and was time to hit the roads. In following few weeks I noticed that two wheels keep loosing air pressure. Had pretty worn tyres so always thought it might me some punctures or leaky valves. One day I bought new tyres online and went to local wheels place to get them fitted. Sadly, ended up with sad surprise that previous owner fitted lightweight wheels and they were so underrated for vans. So I ended up hunting wheels that would suit my just bought tyres. Eventually hunted down BMW SUV wheels with the right PCD and size. But the hassle didn’t ended there yet. BMW wheels used specific type of slim bolts and standard VW ones could not be used. It took me another week to source slim type, specific seating shoulder, thread pitch and overall length bolts as I wanted to run them wheels on wheel spacers just to be more difficult.

Eventually my Red October became my daily ride after I sold my Subaru. Was well happy with it, but there are still some things I want to do in time.