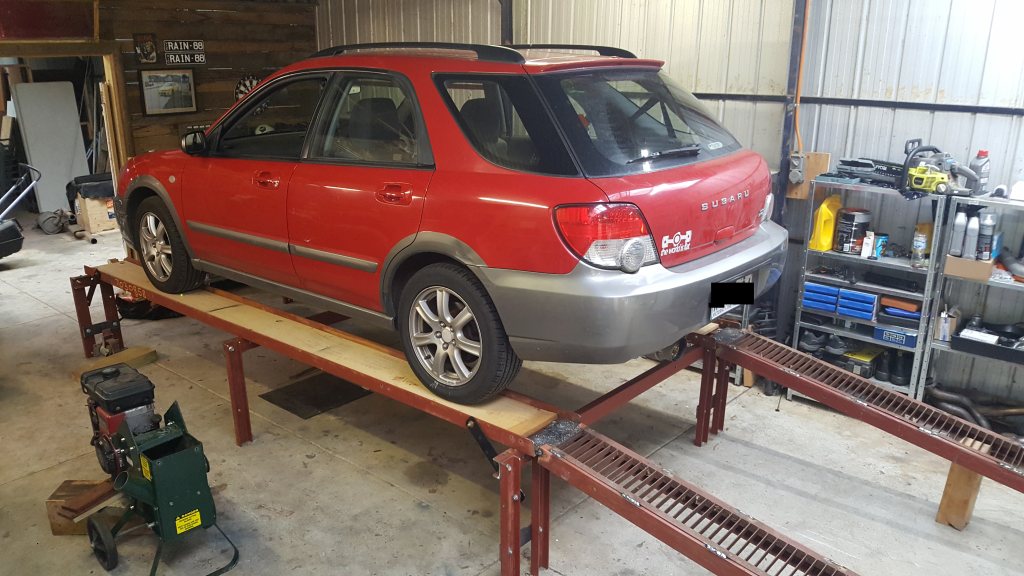 Another little weekend project that will save cracking knees and back while working under the cars. So a while ago I noticed some oil leaks under my van and wanted to give a thorough engine wash. Tried to lift the front up using those cheap car ramps and all they did just kept sliding forwards every time I tried to drive on. Had to nail those things down on the driveway to keep them in place.

Later I kept on thinking that it would be beneficial to have some sort of ramp in a garage. Few weekends earlier I had to put a car on axle stands a few times and it consumed lot of frustration and time. Unfortunately, I cannot get a proper hoist in the rented property so will have to make something temporary or dismantable. Then I came across some C and U channels at work from the delivered equipment packaging that looked like it will do the perfect job. Solidworked a quick sketch to see how much material I’m going to need and a week later I purchased some so called Pommie Channel (because they are coming from UK) for the price of a scrap. The flimsy looking drive-on ramps were mocked up to see the exact length of steel or alloy or something else I will need to get the van up without scraping any components as it is 3.4m at the wheel base.

Whole concoction will be bolted with M14 bolts so had to drill many holes in a thick channel steel. Luckily I could borrow a magnetic base drill that saved hours and hours of drilling and sweating and swearing. However, the end result will be easier to move when needed. The maximum height i could go in that shed was 600mm off the ground and. I left 100mm clearance between the roof of my van and the garages cross beams.

Many holes later and a trip to local DIY store for a longer measuring tape I got the frame squared up and bolted all together. Sometimes it can be really slow progress when working on a heavy items alone in a shed. With health and safety consideration in minds and help of engine crane I eventually erected the ramp up. Made few extra holes to move ramp rails sideways and adjust them for the wider wheel base when needed. My van is way wider than a Subaru.

On FB marketplace I found cheap ramps for a sale that hopefully will do the job. Their rated capacity is 320kg per one so I will definitely have to add some extra support for rolling my van up. At this stage I didn’t had any steel left to make structural reinforcement, besides I was so keen to finish everything up that weekend. I found some really chunky wooden beams laying around that was off-cuts from the house build and I bolted them under the newly bought steel ramps. Also, made a thick plates with a supporting legs where rolling on ramps joints the main structure.

The last bit I really needed is some bracing. Found 4 plates with holes that just needed to be bolted on. And here we are Ver1.0 of my ramp is complete! However, with the first attempt I noticed a slight problem and have to roll back and rethink of making better driving up ramps quickly and inexpensively. Jumped on Facebook market place and found some drainage steel grates for cheap sale. The only downside that they were located 80km away, but I wanted to get it done. Also, it was a Friday evening so I just made a few hours night trip to pick them up.

Brought home some more pommie channel as it was the best option for strengthening rolling up ramps. After mocking and tack-welding one up I realized they will be pretty damn heavy! On the positive side, I have no doubt they will easily hold up my van and even heavier machinery. The welder I borrowed just wasn’t good enough so I had to make a trip to my mate in the countryside and weld them up there. It was more like an excuse to have some beers, escape from the city and socialise with nice people.

I must say, first roll on the ramp was bit scary. Noticed, that the whole assembly is still was wobbly so made more rigid bracing on all 4 corners. And here we are, a heavy duty dismantable garage ramp for cars and vans is ready.