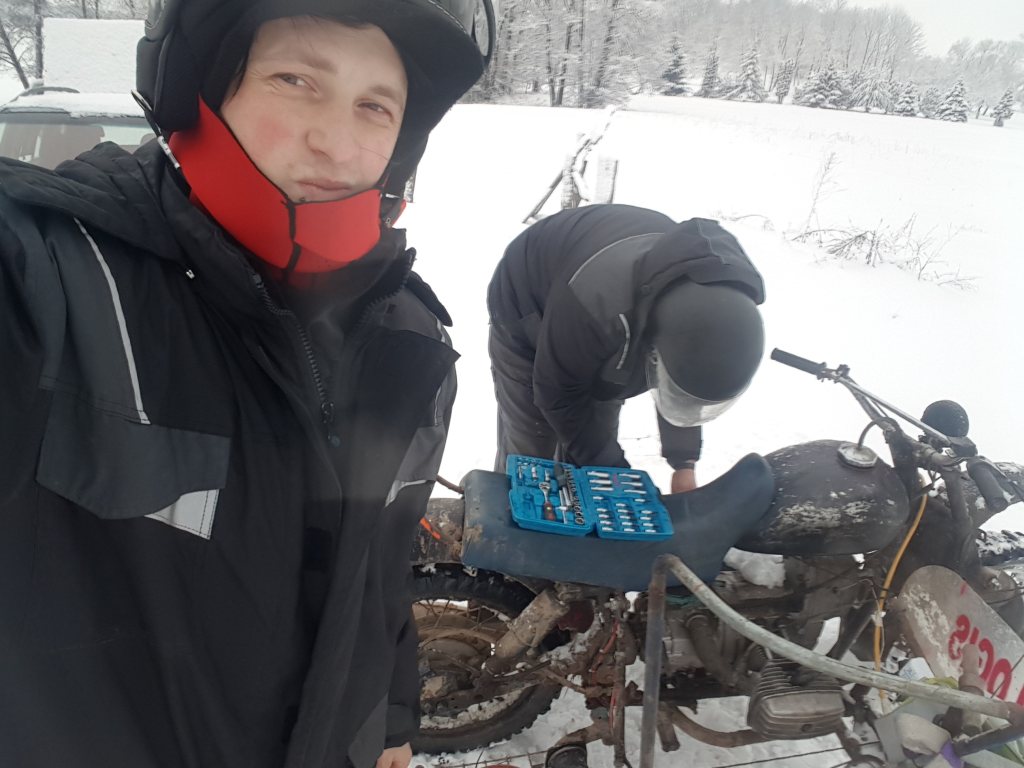 Over the Christmas and New Year Period I made a trip back to Lithuania. It’s been two years since I saw family so it was about time to come back for a bit. After all family and relatives socializing stuff I had plenty of time to see what I was doing in my garage before i left to UK 9 years ago. Before the big move to Australia I I drove back from UK to Lithuania with a loaded van with bikes and all other shed goodies and just dumped there. So now I had plenty of time to spend looking around, engaging in some small works, remembering good old days and even attending to a Lithuanian Winter Bike Show after 10 years of break.

The very first visit after saying “hello’s” and “how do you do’s” to family I jumped into our car, readjusted brains to driving on the right side and slowly drove on snowy roads towards my first garage where our Moto-Zone community east side base/club/meeting point used to be. Driving pass other garages I started to notice various details that looked really bizarre after living for a while in down under. Buildings, that I perceived as very ordinary now looked completely grotesque. However, despite that, those streets holds valuable memories from my teens.

My garage sign is still there! Well during the years someone stole fuel tank and the ignition and the cover, but its still hanging there! When I chained it up 10 years ago I thought it might last a few nights. Inside some unfinished projects, questionable tools collects dust. Blackboard full of drawings from the retrocross projects and a random name before I created RevingFox.

Heres another my double garage where my brother spend days. I must say I wasn’t impressed seeing such uhm.. untidy and dirty place. Electrics are as usual in eastern European style! It does work just don’t touch without the gloves. I was told a story when one phase dissipated in one side of the garages so one retired electrician, grabbed shovel, walked towards the electric box, banged it with shovel a few times and phase reappeared! A SAFE and Permanent fix!

My friends garage is way different. A cosy environment, kettle and a tea and a few really well restored bikes. This is how hospitaly from a one of the best friends work: you coming over to say hello after years of not seeing and first thing you hear: “Hey, grab that bit of wire and there is an electrical socket (power point) that needs wiring up for the kettle.” Brilliant.

While I was there, changed my moms car brakes. It was insanelky scary to brake on icy roads. The discs and pads where so far gone that once you press on a pedal steering wheel wobbled like mad, sometimes one of the wheel wanted to lock up and as a result ABS was was going bananas. In local terms those brake discs can be just reground and “good as new”.

It’s been two years since I dropped my beloved bikes into this brick shed. Those two were fully rebuild and modified and haven’t been used. It is a little bit sad though. The last pic is my sheepvan that made a fully load trip from the UK to Lithuania without any problems. Still registered in UK and pretty much no use of it on Lithuanian roads. I still have a hope to bring them to Australia if the life goes well in the nearest future.

Somewhere in a village I have two more nearly rebuilt beasts resting and awaiting for glory days. The green one was built under Russian Sport Federation order, belonged to one Lithuanian motocross sportsman back in 80-90s. Have a overhauled engine and ignition from VW Golf. The black one was my projects during Uni years. Completely overhauled engine and other mods. They already counting 8 years there.

My trophies makes my mum sort of happy and proud. Its all from motocross and Rallies times. Even at moms place, in the basement where are a few hidden engines and other new parts. One of more interesting projects I started but never finished: Ural motocross engine with the BMW R80 cylinders and pistons, Supposed to be a killer in sidecar motocross. But I wanted to make something like 60s speedway bike with skinny R21 wheels. Oh well, maybe someday!

During the last week of cold holidays I found out that I still have time to attend to Winter Bike Show that usually happens at the end of January. The weather was ideal. My best comrade had a perfect bike as it was literally built for this show but just 9 years ago. On the way to his residence prior the event I went through morning countryside and the views were breathtaking. Still and silence, sun and snow and -3 degrees outside. People live in those wooden houses surrounding by big fields. I tried to imagine myself living there and I must say to some degree it sounds like a best place to be in peace. Till you start going loopy.

Before my holidays Grand Finale (Winter Bike Show) we needed to do some minor works on the motorcycle that we were planning to take. First of all needed to make sure the bike is still there where my mate left it few months ago. In a field covered with plastic.Then dug it out from a frozen ground and make sure if it’s still operational. By the way, the bike is an actual masterpiece. It was born 9 years ago for the same Winter Bike Show event, however, never reached the destination. During all those years it was equipped with some really unusual equipment: Truck cab air suspension, front driven wheel by a starter motor, winch, leading links. All frame was pretty much merged from the random bits that were laying around, there’s no brakes (who need them), no alternator and sticking throttle. So we just made sure everything works and things are held together by zip ties, hose clamps and wires! My mate got incredibly talented minds and hands so he makes some evil engineering on his bikes. Another similar Dnepr motorcycle was equipped with a turbo and a home made ECU that uses Megasquirt software. He is qualified electrician but when it comes to own shed – zero f”cks given.

When we arrived it was noticeable, that things really changed after nearly a decade. Whereas meeting places used to be full of homemade field bikes now all of them were neat, tidy, all registered, kids riding around with ATVs. Hardcore show became a family friendzy event. Here we are rocking up at the gates with the bike called “The Evil”, dodgy as hell and ACDC blasting through the radio. No wonder why we attracted so much attention. It was a nice pleasure when old residents recognised us from early days and welcomed back with a jar of vodka. Gave some local interviews about our monster bike and then hit the snowwy country roads doing various races. Funny thing was that we both could feel that growing up doesn’t help with such tasks! All that huffing and puffing when pushing bike around.

Front driven wheel made a huge difference if we got stuck or slowed down. Always pulled forwards and gave a significant advantage. However, we had to be careful riding too far from the camp as we have a limited amount of juice in the battery and no charge on a bike. The race consisted of various checkpoints in the forests taking over 40km radius from the start line. So after few hours of plaughing though fields we ran out of human energy and just decided that we are happy enough with the activities and its time for an evening beer and soak in a hot tub when outdoors is -5. There is always some intriguing activities happening like this time one guy set his beard on fire just for fun.

Someone made a short video of the Bike Show and you can find our Evil bike there too!

That was the highlight of the holidays. 4 weeks passed quickly. Another set of memories into then collection!