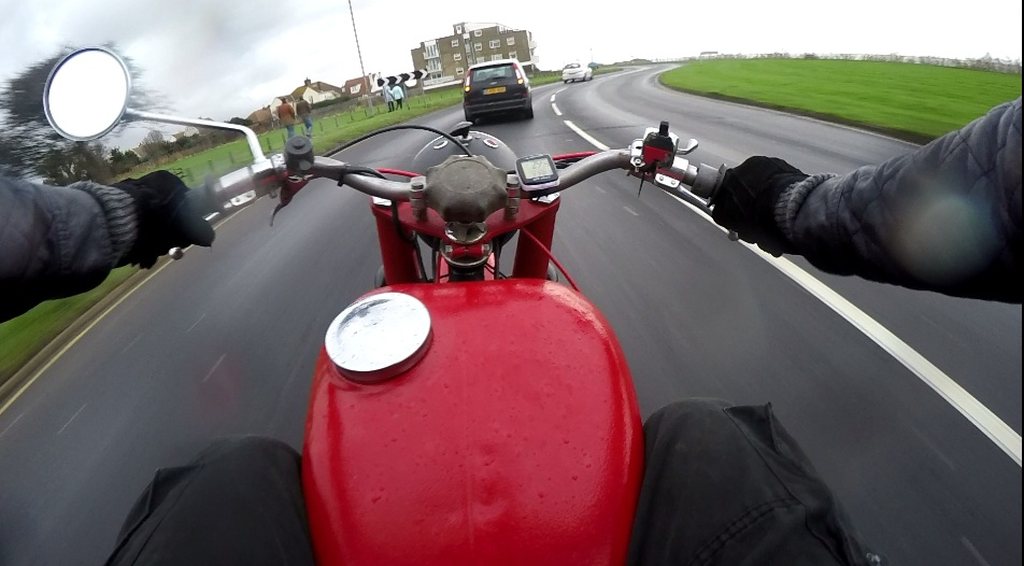 Liepsniukas (“Ogoniok”, “Little Flame”) Part 3/4: I finally settled down in a new country, finally got a really enjoyable engineering based job and eventually started to look back into hitting the roads with the 2 wheeler again. I had one project running in my British shed but that was like century’s bike build and was going really slow. Once I moved to a place with a garage I started to make plans of getting my old love on British roads plus it would be the one of very few models (or maybe the only one) in the country. The biggest problem was that restoring old bike over here without knowing people who could give some mates rates is ridiculously costly. Also, finding parts for the Izh motorcycle is challenging too, whereas back in Lithuania you can find them everywhere.

In 2014 I came back to Lithuania for my yearly holidays. Went to my uncles house and dug out my Flame out of the cluttered barn to the daylight. Wiped off the cobwebs, dust, bird sh*t and with my best friends help brought it back to my old garage.

This time the plan was to do a full bike rebuild and bring back closer to its originality. At this point was hard to say which original model it should be. During all those years it became a mixbreed of Izh 56, Planeta 1, Planeta 2, 4 and 5 models and some japan bike parts. I wanted to go back to my initial thoughts that it was Izh 56 model the first time I saw it. Luckily, I remembered seeing one donor bike at the local scrap yard who had majority original Izh 56 parts left so next day I went there and retrieved that treasure after many years of lurking in a open field. Strangely enough I remember that bike being on the roads and driven by a local biker. Probably he fed up of Russian machinery, upgraded to something more reliable and scrapped this one.

Both bikes were stripped down and all usable parts for the new Flame were put to one side and whats left – on the pile for the new crappy field bike. While stripping and cleaning I found a few big cracks on the original frame welds that really showed a many years of abuse. On the other hand it was sad taking it apart and knowing that the Golden age of careless and and wild motorcycling is over.

So I got majority of the frame parts cleaned and ready,  made a few spontaneous trips to the big local companies who does various manufacturing and luckily, at one, I got the chance to sand-blast all the parts and get ready for painting. I think I had that Lithuanian way of finding useful sources to help with the projects just by randomly going to the big companies and simply asking questions. Just by walking through the main doors or getting attention over the fence you can be pointed to the right people – either managers or simple employees who can help you. This doesn’t really work that well in UK or Australia. Simply different work culture. So back to sand blasting  – I was told to go and see the workshop manager who gave a very reasonable quote (just by looking at the parts and estimating blasting time) and took the parts inside. Few hours later I received a call to come and pick them up! Haven’t expected such a quick turnaround and a funny thing that they don’t do sand blasting services to the public. Very shortly after that I was lucky getting them powder coated. Once again, good old friends always there and ready to help!

At this point my holidays was coming to the end, so I had to find the way to start it building either in hometown or bring all the parts abroad. Second option was hardly possible at the time so I nicely asked my best friend, my comrade to give a hand and pretty much build all the bike. Well he wasn’t that impressed at first.

So the frame was build quickly, with some snazzy oil and gas industry stainless steel fasteners. Old unbeatable engine was dropped in. Found red color throttle cables, old school grips, glass fuel filter, vintage looking spark plug cable and other non standard goodies on UK ebay that were really helpful. I tried to keep it close to original look, however still wanted minor changes. New Metzeller tyres and all wiring loom from only orange cable (my friend who is also an electrician guru found that funny).

The first start up was really memorable. I remember asking my mate: “So hows my little flame”? is it running yet? And the answer was: “Yes its… running with the flames”. Well it made me smile thinking that must be a good thing but then he send me a video of the first startup.

So yes, it literally went on fire. Luckily, nothing got damaged just a few black spots on the powder coated paintwork that wiped off easily. Other than that it started and run as in good old days. But now with the whole bike rework and perfectly working controls, steering, forks and brakes engine started to show its age during all those abuse years. The main bearings are really noisy, not always easy to start it up cold without bump start. And idling does exist only on Tuesdays and Fridays.

Few months later I got it transported to the UK and started a legalization process. Because I owned it for a very long time and it had no owner since collapse of Soviet Russia, I was eligible to obtain a new paperwork and get it registered under my name. The process was fairly easy, had to get in touch with UK Vintage motorcycle club and get an approval that is the right make and model and other parameters and then go to DVLA, fill few forms, get it road legal and Yiff! Number plane and documents arrived! In the process I even managed to build a trailer for transporting the bike around or simply get it back home if it get broken on the roads.

Attended to a few local various vehicle shows and events and that red bike did attract some attention. Even biggest UK’s vintage motorcycle club didn’t had any records about this model so where were a lot of questions about its origin, thick steel mudguards and the engine overall look.

At this point while I was enjoying UK roads I was already plotting to build another engine. The older model one that originally should be in this frame. This will be another engine build saga, where I learned some new skills and overall knowledge in two stroke engines. Will be soon updated!