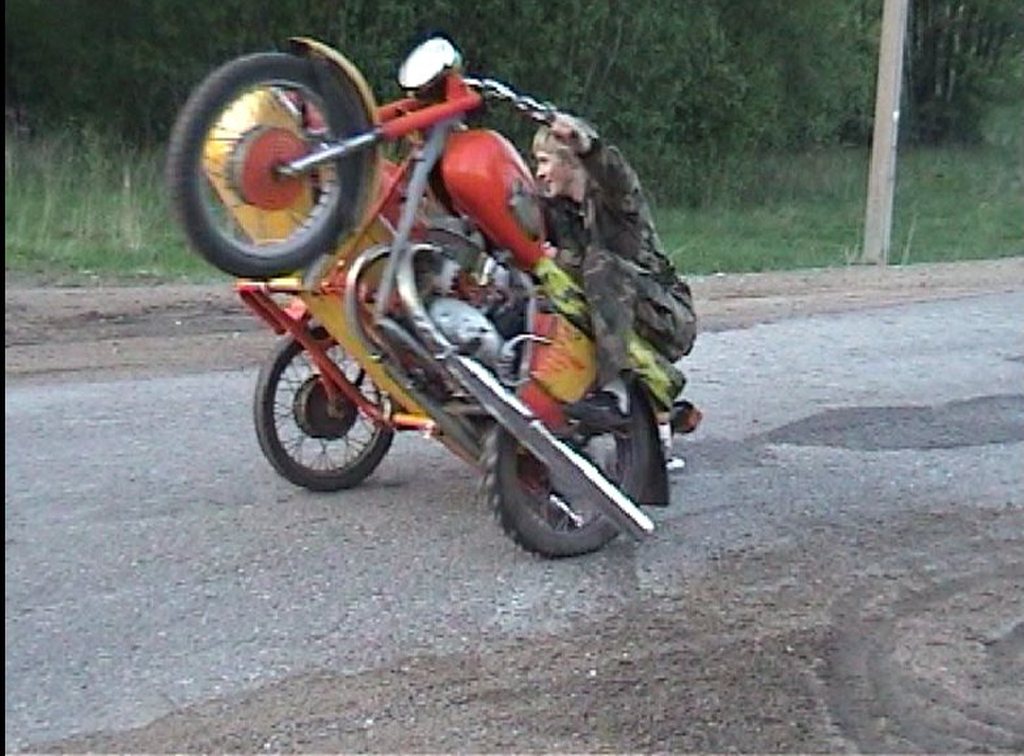 After our website initial launch (www.moto-zone.666.tk) we started to bake videos of “youngsters with bikes doing random stuff”, also started to run a web forum that began to grow up fast and from there everyone knew that this is WhiteDragoon (my old nickname) with his Little Flame. Nearly every weekend I used to come to the village, dig my bike out of plastic covers, jump start by pushing it down the small hill and do all the ordinary field biking stuff. Even to this day it brings a smile on my face when I remember those days. I was still underage and had no driving license but already mastered acrobatic driving across strawberry and hay fields.

Then I turned 18, passed driving tests and managed to get the bike out (on a trailer) to our first community meet and later on to the first winter bike show. Those events left some good memories and plans to attend to more similar shows so I started plotting that it might be a time to do some tidying up.

After several years you could see some developed battle scars. As the bike started to look like a hill billy’s transport. Some of the mechanical workings were totally failed, hot wiring was the only option to get it going, slacky front forks, no suspension damping whatsoever, wheel bearings gone, throttle with a big slack and so on.

So the time has home. Been accumulating various random parts for a while and eventually decided to refresh my little beast. It’s been years of abuse around fields and I wanted to improve my 3 wheeler for upcoming years and also had a hope to participate to more bike events. There were a few really annoying things I wanted to sort out such as front headlight, all dodgy wiring, handlebars and general tidy out. Also I always fancied of getting an original Izh 56 drop tear style fuel tank. Tried to keep flames as its original signature, despite the fact that failed to draw them on one side toolbox cover facing the right way… This was the first bigger repair in 5 years.

Refreshed the paintwork, found unique sidecar and bodged up front mudguard that actually looked even worse than previous one. However that didn’t stayed long and been replaced with original Izh 56 one. Took it to Winter Bike Show and had an unforgettable fun. One guy even asked us how the hell that thing is still running and that well.

During the preparation I had to replace new clutch discs. Thought will play safe for this winter show but I haven’t properly tested bike out beforehand. When arrived I noticed that clutch is so slippery and would be pointless trying to attend to any organized competitions. There the was a dilemma: to skip the fun part, go back to camp, start stripping apart and readjust them or carry on with a dodgy cluch. Luckily there were a quite a few Moto-Zone community members that were ready to give a hand anytime for their fellows. So we flipped the bike on the side car just next to the race start line in front of everyone. Took the engine cover of without spilling any oil and readjusted clutch springs within minutes. The spectators loved our hill billy – pit stop repair.

Here’s another quick snap of later afternoon. Working as a temporary lighthouse in the middle of the forest or maybe was summoning UFOs. Pretty bad quality though.

So that event was the beginning of another chapter. Finally I could either ride it to local events or chuck into the van and travel somewhere further. Some of the meets we did weren’t official and it was more like a field bike gatherings. Another few years passed and during that time I’ve changed few cosmetic parts but, once again, never touched the engine. During university years got hooked on other projects and retro motocross events so slowed down with riding my legend and left it at my uncle’s barn as “the fun field bike” and “the emergency ride if any other project fails”.

After I graduated Uni, I unexpectedly moved to the UK and, sadly, my Lithuanian motorcycling era slowed down till it nearly died while I was discovering new horizons abroad. However, every time I came back on holidays I always had a ride or two around the countryside. So once again, just like 10 years ago, my little flame was left in a barn slowly rusting away with a good memories and the history behind. When our community slowly faded out all memories I had was a bunch of videos and pictures stored on the hard drive. Time to time I looked through them with a big nostalgia. I was still finding my feet on the foreign ground but already started thinking how to bring it back to life. Wanted to make it roadworthy, revitalize its originality but at the same time preserve its history and good old days.