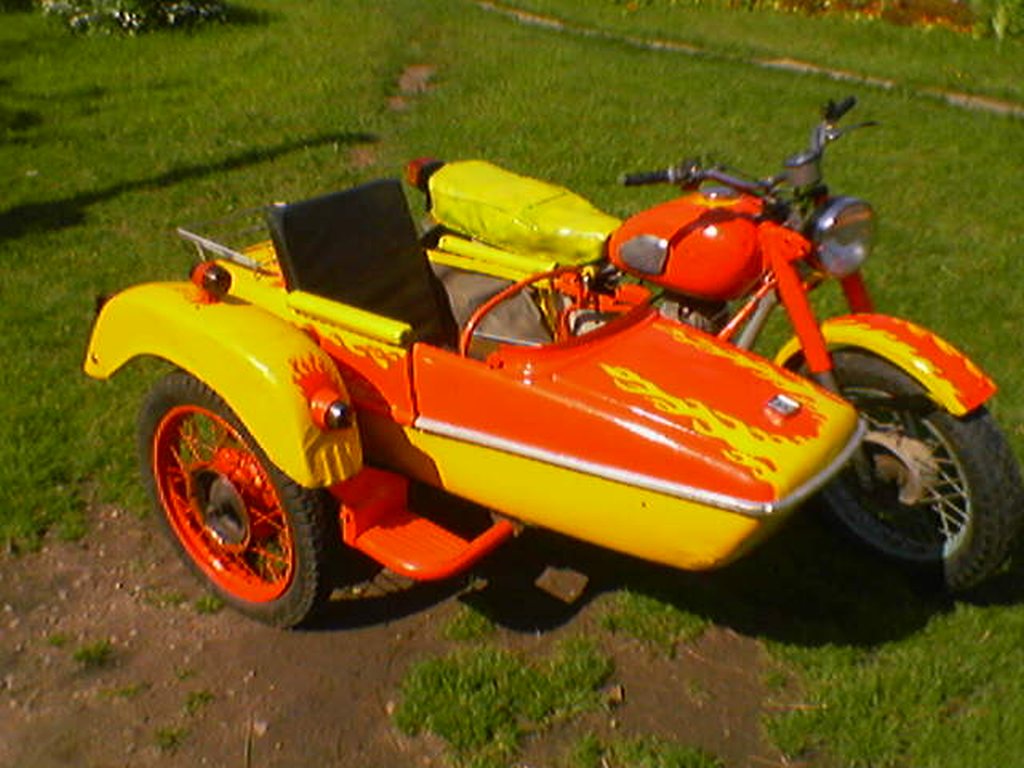 I would like to introduce my legendary comrade I owned since 2003. Back in the days when we ran our community it was well known bike and appeared in a majority of our videos as well as some memorable motorcycling events. In some reason it was associated with our little movement and, I believe, it was seen as a community talisman. Due to the cheesy paintwork it was named “The Little Flame” (“Ogoniok” in Russian, “Liepsniukas” in Lithuanian). The most interesting thing was that my Little Flame was surprisingly (and suspiciously) tolerant to daily trashing around the fields and was very reliable for many years. All I had to change was spark plugs, some clutch discs and, depending on the season, the wheels. Other than that it kept starting up and running no matter what. The bike usually been left outside for weeks and months, summers and winters but always came back to life when I wanted to ride. After several years I understood that this particular bike was, is and will always be my favourite one and I never going to get rid of it.

So there will be 3 different chapters of its existence and the transitions since the day 1 I bought it.

Let’s start from the beginning. I was 16 at the time, we just started to annoy everyone with all this motorcycle movement in the village and all local mates got hooked up in motorcycles too. One day my childhood friend received Izh motorcycle as a present from his dads close friend. However he wasn’t that interested in it so the bike was left without any attention till I slowly started fiddling with it and later on driving around. Few months later I eventually bought it for like $30 and from that moment The Little Flame saga began.

This is how he (yes I’m also calling my beloved bike “HE”) looked like. It wasn’t a full original and with the lack of knowledge in those models we thought that it was one of Izh 56 models produced in 1960s for a long time. Actually it was a mixture of Izh 56, Planeta 1, 2, 4 parts. From what I know he was built from scratch in a shed and was barely used. Also had no paperwork and could not be registered whatsoever. However, it was a perfect machine for a countryside use.

There was one similar bike with a sidecar in the local surroundings and I just wanted to have that thing as well. After few weeks of looking around I managed to find a sidecar from Izh Planeta 3 and strapped it on. Straight away got a dilemma that sidecar was green and the bike was boring black. Well, me being a colourful person, wanted a small change. I found some few tins of old paint, turned on my imagination with the ideas from US car and bike shows and painted the whole bike in 70s funky flames. I didn’t know that the catch phrase on the back of the sidecar will be so bang on and time proved it in the following years.

This one was the first heavy motorcycle I was comfortable to drive. Once I recomputed my brain how to steer with the sidecar attached I did lots of local roads explorations. With such an eye catching contraption I started being noticed by local people who used to ride similar motorcycles and the word spread around. That actually helped a lot sourcing parts and even other motorcycles down the track. Also, back in school few of the classmates also were into them so we joined the forces and started to explore internet horizons looking for more same minded people. Then we didn’t know that simple html one page site of our bikes will will lay the foundations for the Lithuanian Moto-Zone community.