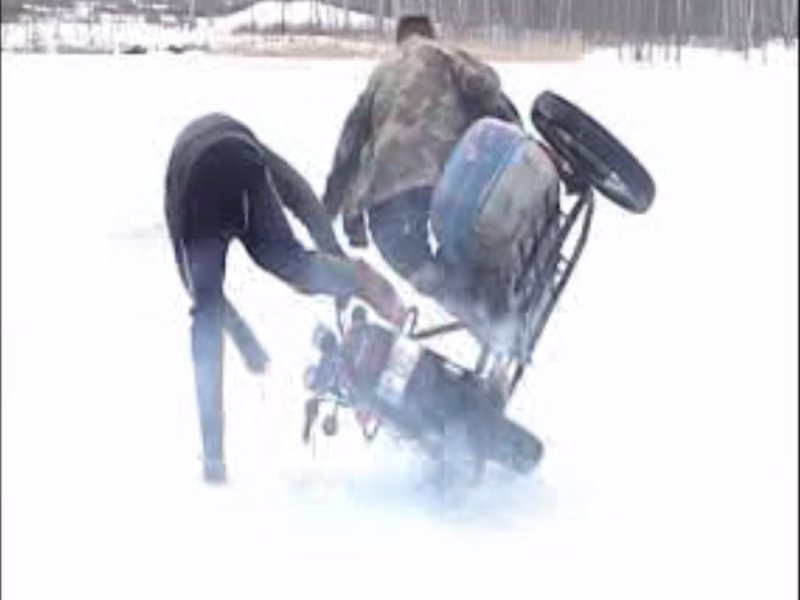 To ride a motorcycle in winter you have to be either stupid or mad. From my own experience I can say that getting into this activity is… absolutely amazing! There is so much fun apart from trying not to break your neck. Random drivearounds or going to the club meets did left the best motorcycling memories I’ve ever had. Or, if you lucky and live not far from lakes, skidding sideways on flat ice makes your heart race. First few winters on two wheeled transport I spend on fields that were covered in a lot of snow and local lakes mastering the skills of doing pirouettes, maxing my commie bikes and in the late evenings – making special edition winter offroading wheels. When you have -10C and it’s sunny, windless day outside, there’s nothing better than go out, have such fun and a god damn good exercise.

When temperature hits -20C you still want to go out do the same thing. Just wearing a bit more clothing. It’s not actually that cold once you started the bikes and hit the road/lake/fields. However, at these temperatures can be abit tricky to get things moving. Engine and gearbox oil usually freezes up, unless you use snazzy and expensive oil (which we never do). I used to set a fire under the engine just to warm it up and be able to crank it. Even then to kickstart old engines is a challenging task and we usually end up pushing them down the snowy road trying to bump start. That is a hard work.

Winter Bike Shows – extremely addictive and fascinating bike events. They usually take places in a forests or some old, partially cleaned up buildings in the middle of nowhere. Forget about comfy beds and heaters! Lucky having a woodburner in the furthest corner. Also they have a slogan – 1% of comfort. People bring their tents and just settle down on a snow or for bigger wimps (like me) there is a 1st class accommodations – sleeping inside old farms on wooden pallets. However, these events attract a big crowd from all over the country and even further. The amount of consumed beer, fun, adventures, people and memories you can collect is really astonishing. Snow and ice gives an advantage to be more equal in all competitions such as navigation through forests, race on ice or motocross on a snow, various stunt and riding shows, no matter what bike you have. Every winter we used to go there and make sure people know about our Moto-Zone community.

Another good reason to attend was that the shows are based on a common sense and if you bring a field bike or your shed creation you can have a fun without worrying about all necessary ownership paperwork, insurances or other vehicle legalities crap. Half of the bikes where shed build and were just simply awesome. In fact few of my motorcycles were exactly the same.

By the way, having a sidecar is also advisable. For obvious reasons. Falling of the bike on a show is fun. Falling off the bike on ice while and then feel burning legs from exhaust pipes – not fun. Going sideways on ice – super fun! Also, helps to rebuild clutch without losing oil during the races…

The last interesting winter thing was making own winter tyres. Proper tyre could cost half of the field bike built total price so it would be just stupid, weird, pointless and socially unacceptable. Who the hell in their right minds going to spend a lot of money on a thing that can be easily made using old tyres and instead of spending money on beer and petrol? No one in the Eastern Europe! Here’s the perfect recipe: M6 or M8 rounded head (Carriage or furniture) bolts, usually 30-45mm long (depending on how creative you can be and what kind of traction you want before you start riding just on a bolts), old tyre either motocross or road (if you planning to go just on flat ice), couple washers and nuts. Think of a pattern, drill shitloads of holes and just screw damn things in. Never let us down, even opening throttle and giving some beans on a bare asphalt never had a bolt ripped out. In fact I kept those wheel as all year rounders on a countryside field bikes.

If anyone who reads this blog ever get a chance to attend to any winder show I would strongly recommend not to skip it.