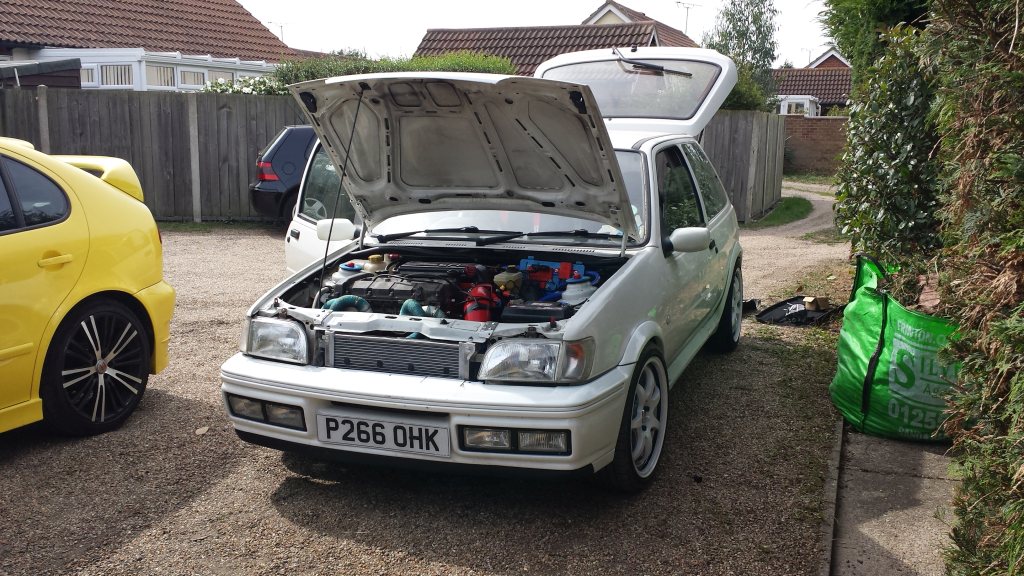 Here’s my first car I bought back in the UK. After many months of suffering public transport I finally decided to get my driving license sorted and also look for my first own 4 wheeled vehicle.

The catch was that the was had RS2000 engine installed and it really attracted my attention. So I bought it without a really good inspection. After quick lookaround I knew that there is some work need doing on a car but I was so exited about the big engine I pretty much ignored them and bough the car. After weeks of driving I decided to jump on Fiesta forums and just expand my knowledge about these engines and also get some advice and info about the repairs.

Oh boy that was a mistake! The simple repairs became massive modifications and more plotting. Could easily find aftermarket parts for those cars and with affordable prices so started to collecting various bits and other accessories. Here is one of the interesting inventions – rear double antirollbar. And a sandwiched gear shifter that became a crunchy quickshifter.

Whole rear axle was replaced with more beefy, newer model one to suit antirollbars and disc brakes. I managed to find a pretty rare old stock slotted brake discs. I believe they were supposed to go on some RS model. Also I went abit different way and made a spacers that goes behind the wheel hubs, not just a wheel spacers. Also spacers/sleeves for a aftermarket front shocks. I bought a 35mm lower suspension set and the front shocks appeared to be thinner than my hubs. Didn’t want to start going and looking for a suitable front set and spend more money so simply made those custom inserts and they did a perfect job.

Brakes been refurbished, new braided lines and everything was tidied up. EBC brake pads, all system was flushed and filled with DOT5 (i think).

Front got snazzy discs too. Also this time fitted off shelf wheel spacers. Didn’t want to get aftermarket adjustable droplinks as they were way too pricey so made my own. Rose joints with welded stainless tube worked quite well. And they were much stronger than skinny originals. The body it the pics looks terrible and had a long good scrub at the end. With the new heavier engine I faced the problem that whole car leans a few degrees to one side. The engine wasn’t properly installed at the first place so for a few weeks I had to stiffer one front suspension to make the car level and later on to play with the engine mounts abit. It was a huge hassle but did get better, sadly not to full satisfaction. This was my first car with the lowered suspension and after first drive I already experienced that uncomfortable low riding.

This was interesting upgrade I was really interested in making it work but sadly never been implemented. I found a specifically designed inlet manifold for RS2000 engine and 4 throttle bodies at the local moto jumble market that nearly fitted perfectly. At the time I didn’t have equipment and time to modify the car shell and gain some space to put 4 throttle bodies with filters. Because RS2000 engine was dropped into a tiny Ford Fiesta shell I had 15mm left between the throttle bodies and the firewall.

The only mod I had to do is to extend aluminium fuel rail and also add longer spacers between the individual throttle bodies. The easiest way was just to cut original rail and weld in spacers in. That way I could keep injectors seats untouched. That way I had option to use either original RS2000 injectors that are bolted on the spacer between engine and a new manifold or a new setup. Or even both! Sadly, whole sexy setup was sitting on my computer desk for months and really winding me up. It was sold together with a car later on.

Next was time to improve cooling. Original radiator had a minor leak and was abusively mounted into a car with the help of cable ties. It would be shameful putting stock radiator back on. Sourced a new alloy radiator for £100 which is bigger than original RS2000 radiator. And looks snazzy. But the trouble was that new radiator was half inch too tall and could not fit into the front window. I went back on forums for an inspiration and found a few forum threads where people cut the top of the front of the panel and make them a removable part. Pretty sure its not the most clever idea in terms of keeping car’s structural integrity but not at that time.

At the same time fitted tubular exhaust manifold. Also did some terrible front panel molestation with the angle grinder to fit the coolant hoses. Looking back at the pictures I feel ashamed of such a poor job! At least it was covered with a rubber trim. Made additional aluminium brace across the front to give some extra strength, bolted top panel bit back on which was cut before and installed two electrical fans. Compact setup and away from the exhaust manifold.

All engine bay was tidied up to my best knowledge at the time. Maybe abit too colorful, but ricer boys loved it and it was a selling plus later on.

With the new setup I got 2.5 or 3 inch stainless exhaust fitted. Not too loud and annoying. Bonnet had to be raised to clear engine itself and the exhaust manifold. Some other minor things I probably forgot to mention. This was first attempt to play with a car. I had it on the road for a several months and then decided to go one step up and get a bigger, estate/touring car for myself.