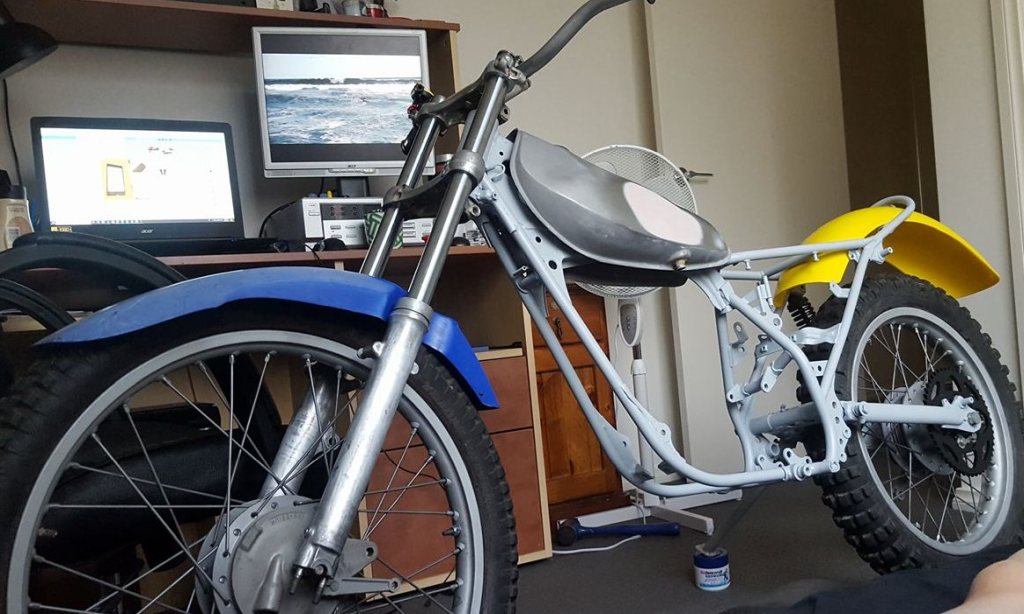 Some repairs I did a while back. When you don’t have well established workshop/garage things are moving pretty slowly. Getting around, finding necessary materials or right people to do some work for a reasonable price and in a new country takes some time.
One weekend was spend on refurbishing wheels. Got them sandblasted together with frame. Both wheels are surprisingly straight, no curbs or ordinary wonkyness that comes after years of abuse. Tried to look for a someone around who could do a quick spray job but had no luck. After few days of scrolling through Gumtree, Facebook local groups and ads I lost the patience, went to a spray store and bough few cans of some specific lacquer for aluminium parts. Time will show if that was a wise option. New seals and bearings as usual. Left original inner tubes and tyres as they are in a field – usable condition so no need to spend extra $200 on them. Unless I decide to go out to proper outback rides I will have to rethink the investments. Rear wheel got not one but two rim locks (yes I spend around 20 minutes googling and finding out how those things are called!) Sprockets and chain came from the UK. Axles and dust covers were Zinc plated along other random bits for this and another, future project motorcycle parts. New slotted brake shoes and cleaned breaking surfaces.

Front forks were properly rusted on the sealing surfaces so had to do something. Finding another set locally looked like impossible task. The another option was to find something similar and just retrofit. Had many thoughts about fitting year 2010 and on-wards motocross or trial bikes whole front. However, one evening I was driving back home from work and saw a lady packing stuff and moving houses. Not far from her car there was a 125cc Atomic bike frame thrown on the ground. So I turned around, stopped nearby and randomly asked about the plans with that thing. She smiled and said: Take it if you want, it will go into skip anyways. So all happy chappy I brought it home and stripped in parts. All it was missing was the engine. Grabbed vernier, measured front forks and found out that they are same diameter as my old Yamaha one. the internal parts were different but tubes were nearly identical apart from a small groove on the bottom end. So I simply swapped them with my old rusty tubes and hoping they will do a job once I hit the road. And won’t leak oil.

The seat was a challenge. The base was so rusted that trying to re-weld was out of the question. The easiest way out was to play with fiberglass and simply build it around on whats left. Frame was sandblasted, stuck few steel bits around the sides where the cover pop rivets will go and stuck few layers of fiberglass with resin. When finished the seat base became twice as heavy as it was. But on the bright side I managed to keep the shape and mounting points. Original foam and a cover is in a decent condition so I put them back. The leather is not as flexible as it should be, but once again, budget is there and have to work around it.

Frame itself in a pretty good nick and haven’t touched it at all. Lick of a primer and waiting for the spray job in the future. In the mean time I was playing fitting and measuring games in my room. Front mudguard from the same Atomic bike, rear one is a replacement from TY Trials store.