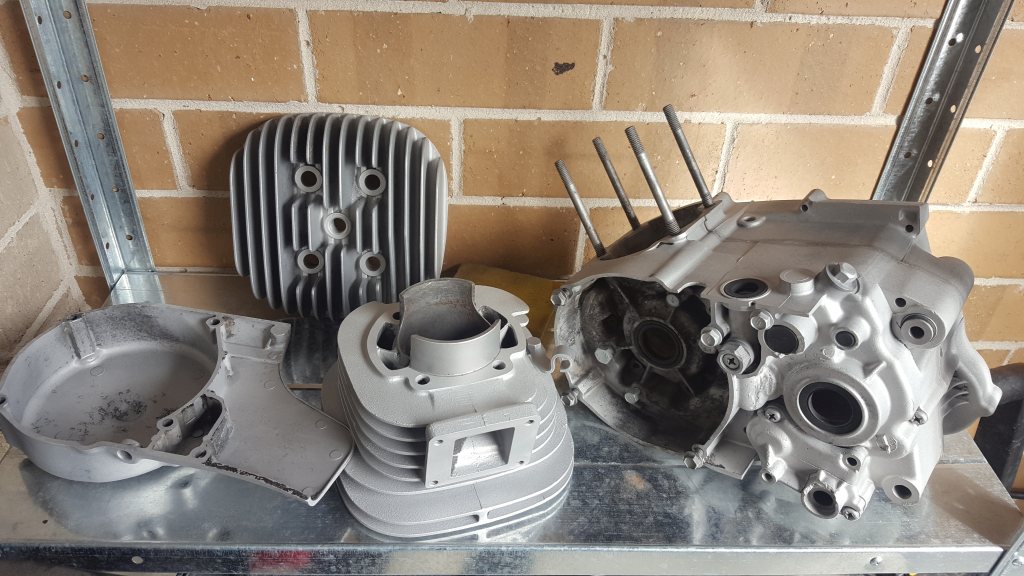 When I got a bike I knew that engine is seized up and not cranking. From a glimpse it looked like it is in a really good condition. I hoped to find something minor like stuck kickstarter or a broken piston ring. But those hopes slowly started to fade away soon as I took the engine covers off. Looks like the engine was sitting in a water for a while. Half of the bolts were rusty or oxidized and was tricky to get them out, but I haven’t snapped any of them!

Two things that really tested my patience was the magneto and the sprocket nuts. I’ve broke a few sprocket teeth till it eventually came loose.

Piston and the crankshaft were seized as well. Two hours of lubricating, hammering and swearing the cylinder was finally off and the engine split in a half. Luckily, the gearbox and clutch are in a surprisingly good condition. During the disassembly I took loads of pictures that became really handy later on. Found a crack on engine cover where the oil pump mounts. Someone probably dropped the engine or a whole bike on the oil pump and crack-dented and the cover.

Crankshaft was rusty but after long soak in diesel, thorough cleaning and close investigation I think it can be reused without splitting it and putting new pin and conrod. No rusts on the working surfaces and no play whatsoever. So I cleaned the whole thing and started looking for someone who could check alignment as I didn’t had necessary equipment. I know it’s not difficult to check alignment with some homemade device and some patience, but I wanted to find people who into bikes around this area and expand my circle of friends. So I asked for the recommendations on a local Facebook motocross group and met a nice bloke who owns a bike workshop. He checked and confirmed that crankshaft is in a pretty good nick apart from rusty spots.

Continue stashing various parts in my desk drawer. Ordered new Hex Cap engine bolts, bearings and seals. A lot of missing parts were ordered from British websites and eBay as well. I’ve kept sending parts to my friend in UK and once I got everything I needed, he made a big parcel was sent to Australia. Just to make clear – cat wasn’t included.

Tried to recover oil pump. Sadly shafts were too damaged and just wouldn’t hold oil. Put a machined sleeve onto one of the pump shafts and it kind off worked out very well. Then I changed jobs and lost the access to lathes. I will simply blank the hole with the blanking plate and maybe in the future will recover this oil pump or will find another with decent price. It’s not that hard to mix petrol with oil before filling up the tank. Been doing that all my life!

Also, I found a person who does sandblasting and Zinc plating. Cleaned cases, cylinder, cylinder head and a few other bits and bobs. Found a few cracks and those parts were send to be welded. While cylinder been waiting for the new piston from the UK I cleaned the blocks and gave some polishing to the crankcases. Removed unwanted casting residue around the ports and made sure the block ports matches to the cylinder ones. I really hate when there is a slight assembly misalignment. It’s not bad on Japanese and German bikes but Russian ones always comes with a really questionable accuracy. Did lots of cleaning and preparing parts for Zinc plating. Some of them turned out really good (mainly fasteners).

New piston is 1mm oversized just because there was a chip in a liner and wanted to get rid of it. Sadly, after reboring there still is a small chip left just on the top of the cylinder. We don’t worry about that too much because piston ring does not go that far up. I was so happy getting a good quality piston from the UK with the stepped top compression ring (exactly the same as the old one) but got face slapped by the guy who did a lot of vintage bike engine rebuilds. He said they tend to easily break and are not the best design. Oh well, I am not going racing so I hope it will be good enough for me. Also cleaned cylinder ports. For me it’s a “must to do” thing when it comes to rebuild top end of any engine. I think I should have tried harder with the inlet port but it’s got a reed valve so I believe it’s not necessary to over polish. Actually, I ran out of sand paper and tiny sanding rolls I was using on the Dremel and, therefore, stopped cleaning…

Gearbox and the crankshaft was easy to assemble. Pictures from the stripdown were really helpful. I couldn’t get some snazzy double sided crankshaft seal on a local market so had to use creativity and squeezed two ordinary seals with one facing backwards as per original design. Probably it was pointless and unnecessary. On the other side fitted second hand ignition and a new sprocket from the big UK parts parcel. Spend some time cleaning original magneto. That thing is damaged by a corrosion and pretty heavy part, so would cost a fortune in shipping another one from the UK. I hope it will work.

Engine is eventually assembled. Next step (which I almost forgot) is to measure combustion chamber and see whats the difference from original specifications and get the right spark plug. Also, had to wait for a few weeks to get few broken bits welded up on engine side side covers. I still missing autolube oil pump cover. For the time being will have to blank with a homemade plate.