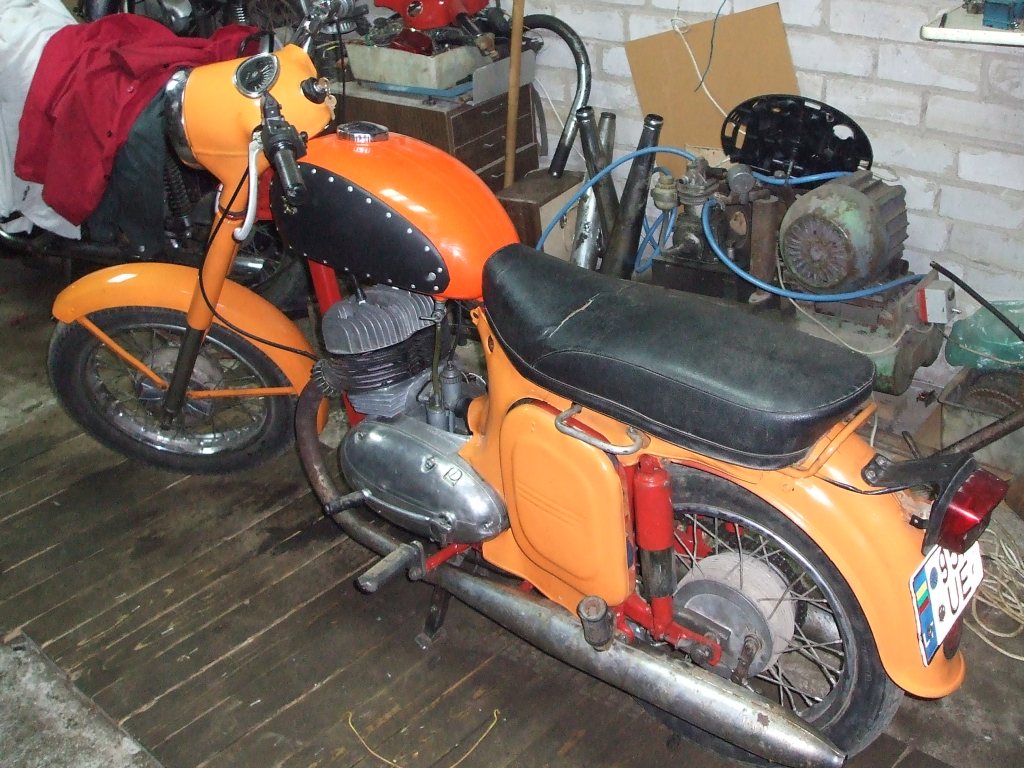 Back in the days when we were actively attending to various bike events and meets I faced a dilemma of not having a roadworthy bike to go to our biggest meet at the time. Even though the garage was packed with random bikes but none of them were properly running or were not registered. Also, it would be sad attending as a passenger so I had to find a way how to roll in there on two wheels by myself. The event was only two days away and I am standing there in a garage and thinking what to do. I still have two days to find a running bike. Possibly I will still have to take it to test centre and get a technical certificate (UK – MOT, AU – RWC, LT – TA) and it will take nearly whole day as queues were and still are enormous at the test centres. So it means I have one day to find one and one day to get it legalised.
Then I realised I have a valid paperwork of an old Jawa 360 motorcycle I bought few years ago. The problem was that the bike itself was stripped apart and sold in parts during the years. All I had was just the frame. And suddenly I thought “Why I can’t just build a fully functioning bike? Still got 24 hours”. So I sent a text message to a few people with the enquiry to attend to this venture and next thing I remember was my two best friends popping up with a big smiles on their faces and beer and already rolling up their sleeves.
So while things were still getting organised I dragged out original frame to the daylight and coincidentally found another similar one from the Jawa 559 in the basement. All been stripped out and had a “professional” lick of paint. Some old fencing paint did a good job! Left the frame to dry under intensive woodburner heat and in the meantime we started pulling parts from all corners and seeing what we have and what we don’t. Luckily main parts were there and just some minor bits had to be borrowed from other bike just to pass technical inspection.

Soon the frame was dry enough to start bolting parts back on. And while I was looking for nuts and bolts and other little parts, my friend Ablawukaz jumped on spray job. On the paperwork is stated that bike is orange. Well I didn’t had orange paint for the frame (actually missed that point at all) so all other bits had to be that color. As you can see from the pictures in a strictly controlled environment Ablawukaz showed his master skills at spray painting.

It turned out pretty good. When you look from far away…

So painting is done, frame is ready, wheels already in place. Adjusting brakes, running all brake and speedo cables through takes longer than expected. While I was working on them Vitka, my dear colleague, literally threw engine into the frame and got it ready for work. I can confidentially say that he is a master of Jawas motorcycles and knows them inside out. All I remember was his carrying engine around and next minute its already in the frame and he finishes adjusting throttle cable. The main build went so quickly I didn’t event took the pics.

As you can see, the handlebars are not original and had to use already cut top lamp/speedo cover to suit. It was a popular mod back in the days when all the bad boys were driving these Jawas. Also, there is way too many switches there. Originally it should be only one and all the lights come from the ignition lock. But my ignition lock managed just to turn bike and off so had to improvise. It was quite tricky to remember which button does what at the inspection place.

And here we go. Finally bike is done up and running. All mechanical workings are tight and fully working, even though it doesn’t look that well. Also, had to swap fuel tanks as the one with amazing paint job was so rusty inside we couldn’t run without contaminating fuel. Also found a quick solution for the wobbly spokes! Found a car wheel cap in a ditch, cut a hole and cable-tied onto rear wheel. I must say wheel was missing few spokes and others were wonky and simply wouldn’t pass inspection. But a little hint from the experience – if they can’t see – they can’t fail. That was few years ago. Now such cheekiness wouldn’t work out.
Did several trial runs around the garage blocks, minor cables adjustments and here we go! Jawa 360 has been done in 12 hours.

Next morning went to registration/inspection place and passed! I had a questionable looks about the different color parts. My excuse was it’s the age and tried to keep original. Soon as I left I broke down few hundred meters away. Fuel tap clogged up with rusts.