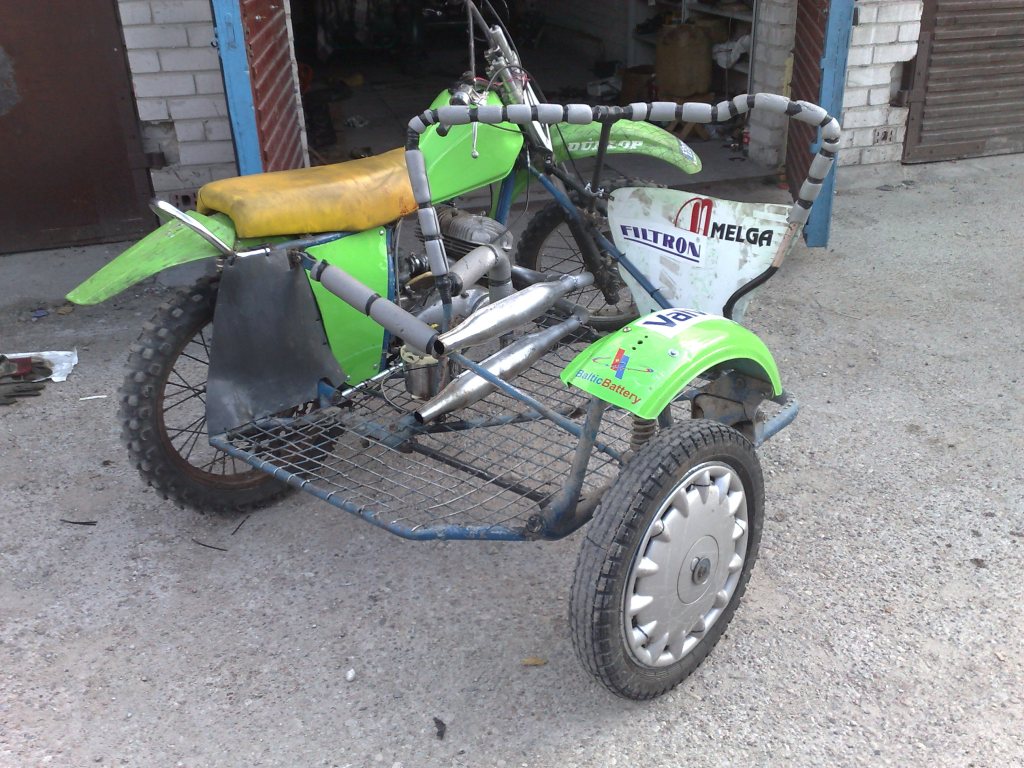 Here’s another project from University and motocross times. One day, at the local retro motocross event, we were discussing about what would be the best vintage bike to turn into sidecar racing one. Between all the opinions there was a lot of laugh about the Izh Jupiter 3 model (1971-1977) that supposed to be the worst model ever made by the IZH company. So we decided to challenge that fact. Went back to our Moto-Zone empire and started plotting to build something to prove that even the worst model can compete on the track. Luckily, another Moto-Zone member had one Jupiter 3 laying around and he was absolutely hating it. So we did a trade: I gave a running Jawa 350 bike (that is actually few times better bike) and took that barely running thing back to the our little clubby garage in the city. Few days later we sourced a sidecar frame and other random parts that “might be useful” during the build, gathered all together and hit the music.

Some careful tinkering with the hammers, drills, grinders, beer and very precise measurements the frame started to get into sidecar cross bike shape. Being young you not taking seriously health and safety measures when I Iook back at the pictures. I don’t think we had any sort of safety glasses laying in a garage back then. All the works were done after lectures as the Uni was just down the corner.

Few days and more welds later we got the frame standing on it all 3 wheels. The sidecar frame was extended back to have more space for the person shifting in it. All bracing and handles was copied form my Ural sidecar bike. We were so exited that we took the frame “out for a walk” on the main city streets.

The sidecar wheel was nicked from a way bigger bike just to push around. In the meantime we wanted to have a stronger wheel on the sidecar as the spokes gets torn out when cornering on a track. So we went to our university Mechanical Workshop and politely asked an access to the machinery shop. There was a generous faculty keeper who offered a hand in our little sidecar wheel project. He jumped into helping us straight away, cut some pipes from old heating system, welded them up and made sure our wheel runs true. All this happened while we were preoccupied exploring various lathes and machinery. Once we got back our rim all done we realized that whole wheel weights nearly half of the sidecar. Added weight is less than desirable when running 350cc engine with the sidecar. Eventually we had to cut some some spikes out but even then during the test drives it was too heavy and we got rid of it.

Along with the frame works we tinkered with the engine a little bit as well. At that stage we still were rookies in two stroke engine modifications and, I believe, this was our first attempt to utilize our questionable knowledge. As per our common practise we sourced the biggest oversized pistons we could find around (3rd oversize), new crankshafts, seals, clutch and all other ordinary parts you change during the rebuild. My comrade did some cylinder porting (in consonance with the Russian motocross handbook) and scavenged pistons at the same time to be them light as possible. Those engines have a flywheel bolted in between two separate crankshafts, so it lost some weight too. This gave us more engine response and higher RPM’s and higher probability to blow the engine up but we liked living dangerously.

Our first attempt to eliminate battery ignition system was to use an old school magneto from my Ural motocross bike. The unit was really massive and unnecessary heavy (made in USSR nevertheless). However, we managed to start the engine up after a lot of swearing and kicking the starter. As you can see my mate was scarily happy with that achievement. We couldn’t get engine running properly with that magneto concoction and we had upcoming Uni holidays so my happy comrade offered to take the bike to his place in a countryside and tinker bit more.

The works in the country were sort of going forward just in a different style. As you can see in the pictures the various random parts been attached just to serve their purpose. We called it – The innovation stage. We were more curious about getting engine to run properly and see how sidecar behaves when cornering. We kept getting some electrical infidelity going on when we tried several original alternators so we literally just kept bodging everything for a week. Couldn’t find decent air filter so zipped one from a truck. On the sidecar. One ignition coil exploded so we zipped two more just in case. Also on the sidecar.

Eventually got this monstrosity running and it clearly didn’t look like our planned Hello Kitty Meow Edition Izh Jupiter 3 cross bike anymore. My friend also mounted 2 separate carburetors for each cylinder that gave us more power but also double trouble in starting the bike up. We had plenty of time to fine tune bike in the fields (I mean trashing around and fixing whats getting broken) and prepare for bike events.

Few weeks later was a miserable attempt to reach Winter bike show that was happening just 10km away. All it needed is just to jump on it and drive though fields and forests where no people or authorities around. Looks like an easy task, but without any battery charge, majority of mechanical and electrical workings cabled tied, sticking throttle and wonky front forks failed half way. And that, I think, that was the end of our innovation stage. We had a list of what needed changing in our bodged original design and I started to think about stripping everything apart and rebuilding with more quality lets say.

With the retro motocross fewer booming it was easy to find decent rolling gear parts on our moto-zone forums. Something that actually fitted and were functional. Got rid of that heavy sidecar wheel, bought compact fuel tank, seat and other plastics from older Japanese motocross bike, made separate 2T exhaust pipes and even added a steering damper from a VW Golf. Nothing is loose and sticky. Picked up same color scheme as my Ural cross bike and very cheeky starting numbers. That was our green Moto-Zone retrocross team. I remember I was so keen to finish all the works that haven’t took any pictures in the process.

Went to the first and the last race and managed to win a 3rd place! Sadly, we didn’t take into account the amount of dust we get on the track and our small air filter could not cope even for a single full lap. Other than that it survived the track and didn’t broke down. We proved, that the worst model can actually compete with higher class two stroke retro motorcycles that used to be the main models for races such as Izh Planeta Sport. After all that fun I had another idea of stepping up and rebuilding bike again with lighter frame and more sophisticated suspension. But this is where the project stopped as it was the end of the Uni years and things started to change in life.